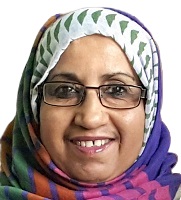 Professor Haseena Khan is the recipient of the Independence Day Award in 2019, the highest civilian award of Bangladesh.

Haseena Khan, Professor, Department of Biochemistry and Molecular Biology, University of Dhaka and Associate Secretary, Bangladesh Academy of Sciences is well known for her research on jute molecular biology. Jute is a symbol of Bangladesh’s national identity. However the potential and feasibility of this cash crop to make high-value bio-based products through biotechnological routes had long been ignored. Dr. Khan’s efforts brought the crop to the forefront of the country’s molecular research.

Professor Khan has been involved in research using the techniques of  molecular biology since 1982 when this discipline was at its infancy in most countries of the world and more so in Bangladesh. Her pioneering on the molecular biology of jute, brought this neglected crop into the very focus of policy makers. This ultimately led to sequencing of the jute genome. Her lab provided the essential genomic and bioinformatics manpower for the success of this project.  She was one of the genome leaders and is a co-lead author of a Nature Plant article. Sequencing the jute genome is the first large scale genome project done in Bangladesh.

The fish Hilsa Shad (Tenulosa hilsa) is a cultural icon representing the heritage of Bangladesh. Professor Haseena Khan’s team decoded the Hilsa genome and was the first group of scientists to publish the genome findings. Her team is continuing the work to understand the reasons for migration of Hilsa from sea to fresh water which would in the future allow delineating conditions for growing the fish in fresh water.

Given that the culture of scientific research in our universities is yet to be as strong as desired, she has worked under conditions where few women scientists have thrived. The small number of females excelling in science is always used as proof of feminine inferiority, damaging the self-esteem of countless women. Haseena Khan’s great strides in science, appeased the public perception that gender discrimination in the workforce is an old problem of misogynistic institutions. However achieving this was no easy task for her. She is now a role model for many aspiring young women scientists.

Dr. Khan has been successful as an educator as well. Because of her long experience in both teaching and research in molecular biology she was made the first Chairperson of the Department of Genetic Engineering and Biotechnology, University of Dhaka in 2001. Her tireless efforts gave the new department a strong footing and it has now blossomed into a successful, thriving and vibrant department attracting the best students of the country.

In recognition of her excellent career in research and education she was elected in 2002 a Fellow of the Bangladesh Academy of Science, as one of only four female members of this apex body of science. She has recently (2018) become a Fellow of The World Academy of Science. She has received the Young Scientist Award in the field of Biotechnology by UNESCO/ROSTSCA (Regional Office for Science and Technology for South and Central Asia) in 1989. She has also been awarded the Bangladesh Academy of Science-M.O. Ghani Memorial Gold Medal in 2011 and the Kazi Mahbubullah Gold Medal in 2015 and Moni Singh – Farhad Memorial Trust Award, 2016 for her contribution to jute molecular biology and genome sequencing. Recently she has received the Dhorittri, Bangladesh Award for 2019.