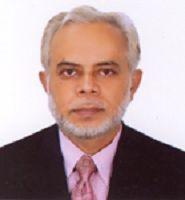 Professor Dr. Md Mozammel Hoq has overall 41 years of experience in various scientific and academic capacities in national and international institutions including International Center for Faculty of Engineering University, Osaka, Japan and University of Dhaka.  He has started his scientific career with BCSIR as Scientific Officer in 1977 and worked till 1980. He then joined Beximco Pharmaceuticals in 1986 for a year.  In the year of 1987 Professor Mozammel Hoq started his academic career with University of Dhaka as Assistant Professor in Department of Microbiology.  He became Professor in 1997 and after a lot of contribution to the nation he then retired in June 2019.

Professor Mozammel Hoq obtained his Bachelor of Science (1975) and Master of Science (1976) in Biochemistry, University of Dhaka.  He than completed one year diploma (1977) in Applied Nutrition and Dietitics in Institute from Institute of Nutrition and Food Science, University of Dhaka.  He then completed one year International Post-Graduate University course (1980-81) in Microbial Engineering in Osaka and Kyoto University, Japan. Professor Mozammel Hoq obtained his PhD from Nagoya University, Japan in the area of Microbial Biotechnology in 1986. Later he completed Post Doctoral Program at National Research Institute of Biotechnology, Germany (1992-94).

In the editorial capacity, Professor Mozammel Hoq became Member of the Editorial Board of “Bangladesh Journal of Microbiology” and Editor of “Frontiers Public Health”.  He was also Member of “The Dhaka University Journal of Biological Sciences”.

He has published over 105 research publications including 48 international and 57 national.  Some other publications are in national dailies.  Professor Mozammel Hoq so far supervised 10 current and completed PhD students.

Professor Mozammel Hoq has got a Patent right on “Development of a Bioprocess for Industrial Production of Proteases by Bacilluslicheniformis DUH10 and its Application in Bating of Hides and Skins in Leather Industries”.  Patent Ref.: BD/P/2013/000260.   His team developed bioprocess on “Industrial protease production for leather industries” that has been transferred to the Active Fine Chemicals Biotech Ltd for commercial level production.

A couple of books published and contribution to the book he made are as follows: i) Pesticides in Bangladesh: current trends in the usage and research on biopesticides, ii) LAP Lambert academic publishing GmbH& Co.KG, Germany, 2011. Iii) Continuous synthesis of glycerides by lipase in a  microporous membrane bioreactor. In Enzyme Engineering 7’ Ed. A. I. Laskin, G.T. Tsao and L.B. Wingard, JR, Annals of the New York Academy of Sciences, 434,558-568 (1984).